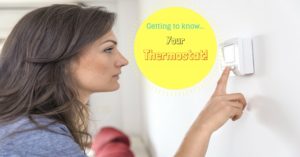 Your thermostat doesn’t have to be a stranger. In fact, let us introduce you. Introductions usually start with a name, so… the word “thermostat” is a combination of two Greek words. “Thermo,” which means “heat,” and “statos,” which translates to “standing,” “stationary,” or “static.” Thermostat basically means “keeps heat the same.” Thermostats connect to your HVAC system and a thermometer. The thermometer monitors the temperature of your house. When the temperature is different than the temperature you’ve selected, it activates either your heater or your AC. The heater or AC heats or cools your home.

The heater and AC units switch off to prevent overheating/cooling after they’ve achieved the desired temperature. Most models of thermostat take some time re-activate the process that tells your heater or AC to turn on again. That way, your heater isn’t switching on and off constantly, wasting power.

All thermostats perform the same essential function, but the way they do it differs. Different ages, models, and types of thermostats use different means of measuring temperature and communicating with the HVAC system. Every major thermostat brand uses a different proprietary process, and their processes inevitably change over time with the introduction of new ideas and technology. What that being said, basic principles of thermostat design are common across all brands and styles. Here are four of the most common types of thermostat and how they function: 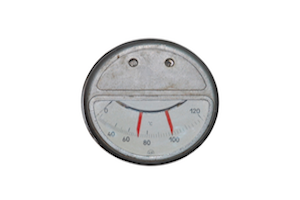 Some basic thermostats use no electronic means of connecting or communicating with your HVAC systems. Instead, they rely entirely on simple mechanical processes and physical phenomena.  Thermostats heat your home through the power of science! Specifically, most mechanical thermometers rely on thermal expansion to communicate with the HVAC system.

Mechanical thermostats contain something called a bimetallic strip. This component is simply two strips of different kinds of metal bolted to one another. The bimetallic strip serves as the “bridge” for an electrical circuit hooked up to your HVAC system. This bridge completes the electrical circuit, supplying the HVAC with power and allowing it to run. As metal heats up, it expands. However, every metal has its own expansion point and rate of expansion. That means the two metals that make up the bimetal strip expand at different rates. This makes the strip to bend to one side or another.

With enough bending, the bimetal strip is no longer aligned with the electrical circuit. That means the circuit is “broken,” or incomplete, and power can’t be supplied through it to the heater. When it stops getting power, the heater turns off. Therefore, the heat of the bimetallic strip determines whether or not the heater is on or off, and ultimately, helps determine the heat of your house. 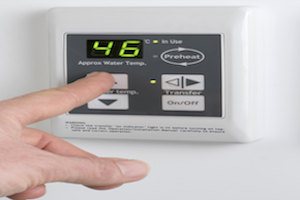 One problem with mechanical thermostats that use bimetallic strips is that the metals making up the strip take time to expand and bend. They also take their time contracting back to their original position when the house is cold. That means the process of turning on and off the heater isn’t as effective or efficient as it could be.

To address this problem, some mechanical thermostats began using the expansion and contraction of gas in response to heat instead of metals. These thermostats contain a pair of metallic discs. These discs are connected by a bellows that’s filled with gas, and one of the discs is positioned close to, but not touching, a micro-switch which deactivates the electrical current supplying power to the HVAC. That means pressing the microswitch effectively powers down the heater.

The metallic discs have a larger surface area than the strips do, so they react faster to the heat of the room. As the discs get hotter, the gas in the bellows between them gets hotter, too, and it begins to expand. When the gas expands the bellows push outward, forcing the discs away from one another.

When the bellows have pushed enough, the disc near the microswitch connects with it. This deactivates the electrical current and turns off the heater. When the room begins to cool again, the gases contract, the bellows return to their original position, and the microswitch is depressed, allowing electricity to flow back into the HVAC. 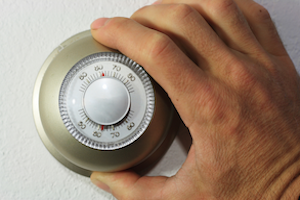 Unsurprisingly, electrical thermostats make use of internal electronics to activate and deactivate the HVAC system. Most modern non-digital thermostats are electrical. Usually, this thermostat contains something called a magnetic latching relay.

The magnetic latching relay, like other thermostat components, is more-or-less exactly what it says. The relay hovers over two contacts that, when activated, supply the HVAC with power and turn it on. The magnetic latching relay activates these contacts when it is supplied by an electrical pulse. This electrical pulse causes the magnets in the relay to “latch” onto the contacts, “closing” them and relaying electricity (see? Magnet, latch, relay) in order to activate the HVAC.

Small electronic devices which attach to the thermostats’ thermometer supply the pulse which allows the magnetic latching relay to close the contacts and supply power to the HVAC. Another set of coils and pulses controls re-opening the contacts, which deactivates the HVAC function. These electronic devices activate and send out their pulses when your home’s room temperature is too low or too high.

Aah, yes, our personal favorite thermostat. The modern digital design of these thermostats give them some distinct advantages over their analog counterparts. For one, digital thermostats are better at quickly turning on and off the HVAC system, as well as monitoring actual room temperature, which means they’re more efficient and they save power. Even better, digital thermostats can be manually programmed to make your house different temperatures at different times of day.

For instance, there’s no point in keeping your house warm while everyone’s at work. With a digital thermostat, you can save a lot of money by giving your heater a break while no one’s around. Just program the thermostat to activate your heater a half hour before you get home, and you’d never know the heater hadn’t been going all day. At least, until you see your heating bill.

Digital thermostats work by using a resistor called a Thermistor to measure room temperature. Resistors resist the flow of electrical current through them. The amount of pressure the Thermistor produces is based on its temperature (resistors like the Thermistor are called “thermal resistors).

The thermostat is small, but it serves an extremely important purpose. Without it, you couldn’t interact with your heating or cooling systems at all! If you’re concerned your thermostat is broken, or if you want to upgrade your old thermostat to a new digital version, call or schedule an appointment today.