Lightning occurs during storms when there’s an imbalance in electrical charges between the clouds and the earth. Electrical charges located near the ground called streamers attract opposing charges in the sky. The two charges race toward one another, often reaching speeds of up to 200,000 mph. When the two charges collide, they create a lightning strike that moves 200,000,000 mph and contains a billion volts of electricity.

The “streamers” that create lightning can rise up through trees, your home… or your body. Lightning probably isn’t going to hit you next time it rains (you have a 1 in 5000 chance in your lifetime). It could, however, electrocute you when it streams through a nearby conductor. Lightning kills 2000 people worldwide every year. You can’t avoid lightning, you can take steps to minimize your chances of being affected by it. Keep these storm safety tips in mind the next time your hear thunder, and you’ll drastically reduce the odds that your home becomes a lightning rod. 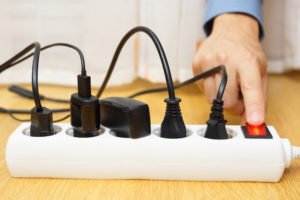 Power outlets naturally carry a charge, since electrical power runs through them. Charges produced by outlets may attract lightning in the atmosphere during a storm. When lightning may strikes and arc through a power outlet, it supercharges the outlet and connected appliances with more electricity than they can handle. This phenomenon is called a power surge. Electrical power surges can burn out computers, destroy televisions, start fires, and electrocute nearby conductors.

Surge protectors are power strips built with storm safety in mind. Their built-in power limiters redirect excess electricity toward a grounding wire, neutralizing it. The lightning still arcs through your wires, but the power it produces is safely neutralized, and it can’t harm the outlet, connected appliances, or you. Consider investing in surge protectors, especially in parts of your home that use a lot of electricity. Make sure the power strip you purchase actually has surge protecting functionality. 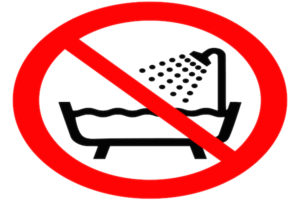 Any water that isn’t distilled or deionized naturally carries a very slight electrical charge. The charge is negligible enough that it can’t affect you in any way, but it can attract and conduct electricity. All the tap water you bathe or shower in can become the streamers that create lightning. Even if lightning only hits nearby, it can still travel through charged water.

Your risk of water-based electrocution depends on how much time you spend in water and how much of your body is wet. Washing your hands and using the restroom is (thankfully) relatively safe, but you and your family should refrain from bathing, showering, or doing laundry to practice storm safety. Pay attention to the weather patterns and only get in the shower once you’re sure the danger has passed. 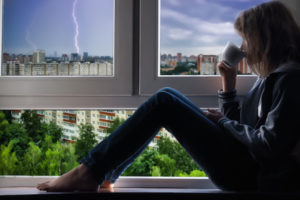 Staying inside arguably puts you at greater risk of secondary electrocution, but you can control your environment for storm safety much more than you could outdoors. You won’t have to worry about storm-generated shrapnel, either. During bad storms, go inside and stay near the center of a ground-floor room. Avoid lingering by windows and appliances that naturally consume a lot of power, like washing machines or refrigerators.

HAVE A SHELTER PREPARED 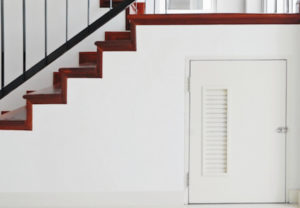 The best place to be in the event of a major storm is in a basement or similar underground place. Find a part of your home that’s on the ground level or underground and get under natural cover. If you don’t have a basement, a crawlspace or closet under the stairs, or even a central hallway is a good backup.

Storm safety shelters don’t just protect against electricity. They can also help protect you in case of tornadoes, strong winds, or structural damage. If you hear tornado sirens, get everyone into your storm shelter immediately. Have a radio or similar device ready there, so you can listen for weather updates. Remember that metallic pipes and electrical wires can attract electricity, so don’t shelter from storms too close to plumbing or power lines. If you want to be really prepared, you could store sleeping bags, blankets, flashlights, and water in your shelter. 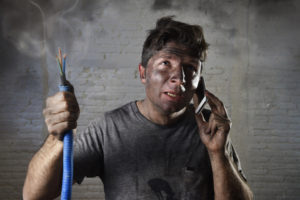 Metallic objects like golf clubs, aluminum bats, phones, and laptops all attract and conduct electricity. Metallic electrical wires are especially dangerous, because electricity can use them as a path to arc through. If you’re at the end of one of these “paths”, the electricity could arc straight into you!

Avoid using telephones or computers during electrical storms unless you absolutely have to. Store other metal objects somewhere safe, like the basement or in a closet. Remember: lightning always strikes the area with the greatest opposing charge. The essential part of storm safety is knowing where that area is and staying away from it.

Some of these steps may seem inconvenient, especially during storm season, but remember: things are replaceable. You and your family are not. During storms, don’t worry about protecting your stuff; worry about yourself first.

Even if you get unlucky and a lightning storm burns out something really important like your air conditioning, that’s what you’ve got Blue Ox for. We’re always ready to make the repairs you need to stay cool, so you can focus on staying safe. Have a great summer!